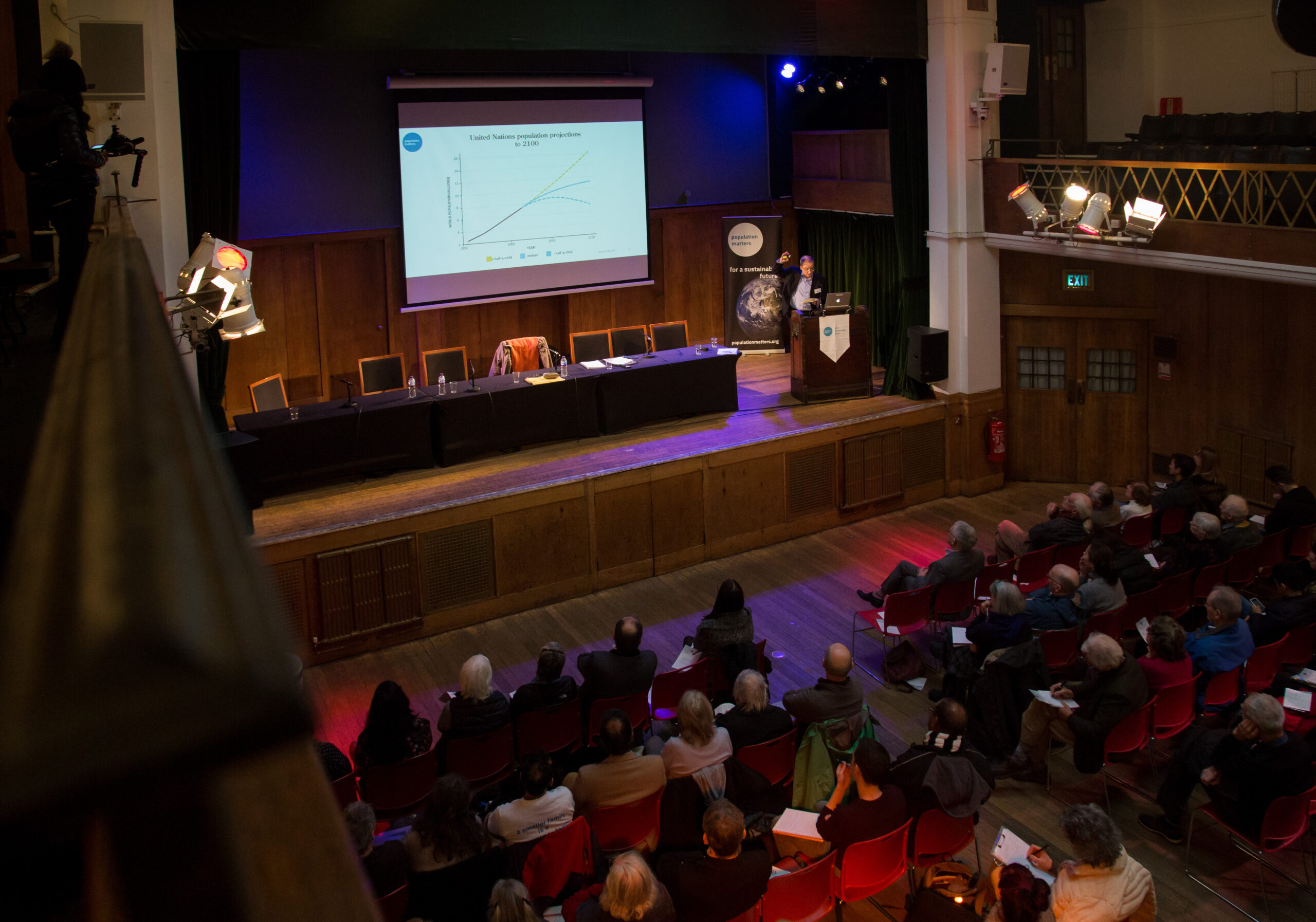 On Saturday, Population Matters’s 2018 conference, Climate change and Us: more feet, more heat? took place in London. Despite appalling weather in the run up to the event, hundreds of people turned up for a fascinating and engaging afternoon of discussions.

Our international panel covered a wide range of topics, including the effects of climate change, its impacts on food supply, the challenges of empowering women and the future paths of population and emissions.

In Adrian’s arresting keynote address, he gave a telling account of his experience as an adventurer in Greenland and the Antarctic, where melting ice was not an abstraction but a daily challenge and danger. Drawing a clear link between population growth and climate change, Adrian proposed a more comprehensive and holistic definition of sustainability than is often used, describing it as “the most over-used and misunderstood word in the English language today”.

Peter’s presentation amplified and substantiated Adrian’s accounts of his polar travels. As one of the world’s leading polar scientists with more than 47 years’ experience of visiting and measuring ice at the poles, he provided a lucid and sobering explanation of the impact of global warming on the poles, and the way in which the disappearance of polar ice is itself hastening global warming, and contributing to extreme weather events such as the March blizzards preventing some people attending the conference.

Peter’s talk also highlighted the link between global temperature variations and food shortages and price rises, illustrating how the production of many staple grains will be reduced by climate change. With food demand set to soar as a result of rising global population, his talk provided a clear indication of how climate change will affect hundreds of millions of people’s lives very directly.

Peter was followed by Farah Kabir, the director of Action Aid Bangladesh, an NGO working across 40 countries to end poverty and empower people in the global south, especially women and girls. Farah’s presentation – Population and climate change: a South perspective – also addressed the challenges of population growth and food supply but she concentrated on the structural and economic factors also at play. She warned of the dangers of focussing solely on population and family size when people in the poorest countries are responsible for a fraction of the emissions of those in developed countries.

Farah noted that poverty, lack of education, culture and patriarchy – control of women’s bodies – are some of the key reasons for population growth and that models of development that fail to address inequality and favour industrialisation and consumption are bad for both people in the Global South and for the global environment.

The final presentation before moving onto the panel discussion was by Robin, tying together the population and climate change picture. Robin repeated and amplified Farah’s point about the hugely disproportionate impact of people in the developed world, noting the conclusions of a 2017 study that suggested having one fewer child is by far the most effective individual measure to reduce emissions for a person in the developed world.

Robin also noted that there is little evidence in contraction of consumption in the developed world (or globally) and that “contraction and convergence” (ie less overall consumption and emissions matched with greater equality between nations across the world) will require lower numbers of people across the board.

His presentation examined how even countries with low average per capita emissions such as India can still be major contributors to climate change if their population is high. With population set to grow most dramatically in the developing world, Robin emphasised the vital role that family planning and women’s education can play, highlighting 2017’s Project Drawdown analysis of policy responses to climate change, which concluded that family planning and girls’ education were among the top ten practical solutions available today.

Following the break, the speakers were joined for the panel discussion by Judy Ling Wong, President of the Black Environment Network and Ambassador of the Women’s Environmental Network. (Former Guardian environment editor John Vidal who had also been expected to join the panel was defeated by climate change itself, with his train from Wales cancelled because of snow!).

Expertly chaired by Sara Parkin and guided by written questions from the audience, the panel’s wide-ranging discussions covered many aspects of the issue, with a great deal of emphasis put on the value of genuinely empowering women. Panellists also addressed the failings in the political response to climate change in the UK and elsewhere – and what message should be sent to the British Royal family regarding family size – to which Sara Parkin firmly answered “stop at two!”.

Robin Maynard wound up the conference, affirming the sense of positivity and constructive engagement that had emerged from it. He briefly touched upon next steps, including the work Population Mattes intends to take up working with international partners.

Both speakers and audience members seemed to judge the event a success and we are delighted that so many people – many of whom were new to the issue – joined us in spite of the weather.

We need your support to extend the reach of our campaigning, advocacy and education activities. Please consider becoming a member or making a one-off donation towards our work – and join thousands of people across the world who are already taking positive action to change policies and influence behaviour.